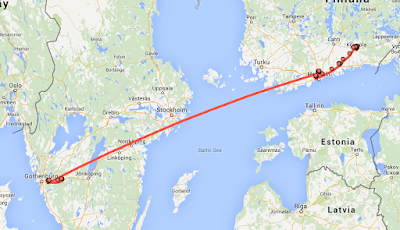 It's been a while since the PAPA tournament and to be honest I haven't missed the tournament playing that much. I've been slowly starting to find my place more in the maintenance and organizing side than playing. Thus once I learned INKen needed some able guys to look after the pins, I jumped at the opportunity.


Arrived at INKen's place, checking out the Swedish Open location and helping out where we can. pic.twitter.com/vNCTTrrljR
— Ari 'APz' Sovijärvi (@apzpins) May 15, 2015


This is the first ever Swedish Pinball Open tournament. Well, sort of, actually this is the old Stockholm Open, except the tennis tournament took offence for the name and it's not in Stockholm any more. I also attended both, Main and Classics tournament as well, since I had already paid for them. Too bad all the Finns had already paired up so I had no partner for the splits tournament.

My strategy for the qualification was a rather simple one. I'd pick 6 machines or so, play couple of entries so I'd got to play 'em all, select best playing 3 of those and then grind away until I was in. However before I got to play I had couple of hours of score keeping duty and when the Doctor Who's mini playfield broke, I spent 3 hours of taking it apart. On the more positive side, the end result was better than the original.


After trying out some of the classics, Xenon was the strongest game for me. I only had time to play the 4 entries included in the sign up fee, and out of those and entry with 781k in Xenon, 575k in Hot Doggin' and 283k in Joker poker was the one that took me above the cut-off line.


In a surprise move I teamed up with New Zealand's own Rotor Dave and formed a splits team called Almost Neighbours. According to RD he had never tried splits in a real tournament, so we agreed to play just for the laughs. The splits line-up was full of games we both knew well: The Addams Family, Iron Man, Creature From the Black Lagoon, No Good Gofers and Junk Yard. Our couple of first tries were a bit rocky, but then we started to get our act together and we were genuinely pleased with ourselves.


The real shocker however was that the entry went straight to the 2nd position in the qualifications, right past many other teams who've played splits for years. We knew it wouldn't last, but as the qualification time was running out, we came clear we'd be in the top 8, which was enough to qualify!

In the main tournament Walking Dead was my strongest game and it was in most entries I played. Unfortunately it also failed me couple of time when I had done decent scores on two other machines and then tried to finish the combo. I did buy couple of extra entries, but those got me nowhere. In the end I didn't qualify in main, but was 25th out of 32 qualifying players out of 94 players in total. Oh, and Team Almost Neighbours was 5th out of the 8 qualified teams. Whee!


Didn't qualify in the Main series. Didn't have the time to play all of my entries. Still, super stoked about the Splits and Classic.
— Ari 'APz' Sovijärvi (@apzpins) May 16, 2015


I spent my last main entry to give the Road show another go, and finally broke a billion point limit on it. There's nothing more satisfying than making a high score entry on a tournament game! Too bad the two other machines sucked hard, so that entry was a one game wonder.


Gotta love this feeling when you're playing a tournament entry. pic.twitter.com/yraoRKCIqI
— Ari 'APz' Sovijärvi (@apzpins) May 17, 2015

The playoffs started with the classics series against APB. Our first game was Blackjack, which apparently was a familiar machine for both of us. It was just a race of getting the bonus multiplier up and hoping to have a better hand than the dealer when cashing out the saucer. I lost this one 150k-129k. Next was Xenon. I had my game face on from the very start, played couple (really short!) multiballs, and racked up 884k to APB's 303k, bringing this thing to tie. The last machine was Bally's Lost World, where we had two really bad balls to begin with, but the APB pulled a 5x maximum bonus, leaving me far behind. I activated my game face yet again and pulled a similar trick but with 3x, but I cashed out the saucers enough to catch him. The last balls weren't anything stellar, but APB took a minor lead and in the end took the game 240k to 227k, and I was out.

Had quite nice round 1 in Classics playoffs, but ultimately lost by the skin of my teeth to APB. pic.twitter.com/DhsF5cpJhf
— Ari 'APz' Sovijärvi (@apzpins) May 16, 2015

Later on Team Almost Neighbours went against Team PAJ. We dreaded the fact that we hadn't had time to finish our 4th qualifying entry, where we had picked Iron man just to see how it plays. We started out with No good gofers, which was pretty bad for both teams until 3rd balls, where PAJ caught us. Next up was the Iron man. PAJ apparently went for the Iron monger multiball, but we deemed it too random and went for the Bogie instead. While we had some issues with the ramp shots, we still only had to plunge the 3rd ball to win the game. The deciding game was the Creature, where the others pulled a succesful multiball from the start. We considered going for the ramp millions, but as I skillshotted both K-I-S-S and P-A-I-D, we decided to go for the multiball as well. We had some crap luck with the creature search, as we made both side shots and couldn't find the creature. Then the rubber post near the snack bar hole gave a nasty bounce and we lost the other ball and couldn't get the multiball running and ultimately lost the game.

I qualified in classics and splits and was 46th of 97 in main.

While the outcome wasn't much to write home about, for the longest time I enjoyed playing and jamming to my gaming soundtrack. I'm now considering on playing in some random tournaments back home as well. We'll see.
Posted by APz at 13:05