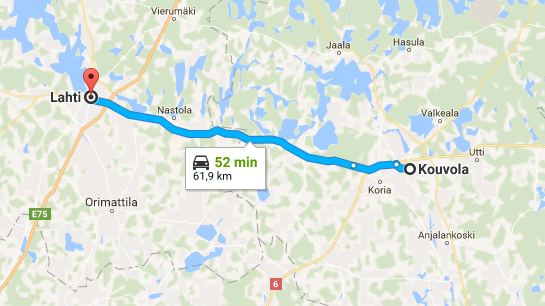 The last Finnish Championships were held back in 1997. In later years the Finnish League has pretty much settled the question who's the best player at the time, not to mention the longest running independent tournament, Sörkka Pinball Open.


The tournament had score based entry, 2 entries (both meaningful) on 6 random predetermined games. The games included 2 classics and 4 more modern games, ranging from 90s to 10s. 32 best players from qualification went to the playoffs, which where standard player vs player, best 3 out of 5 playoff bracket with 4 player final game.

My qualification games were: Attack from Mars, Count-down, Dolly Parton, Monster Bash, Shadow and The Twilight Zone. Save the AFM, I was really happy with the line-up. For some reason I've never felt comfortable with the AFM in tournaments and I had a really bad feeling about this one as well, especially since I'm familiar with this particular AFM.

As I was also a pinball mechanic in the tournament, I started my qualifying run by giving couple of the games some love and final tweaks before starting the grind.

Since I knew what I was going to play, I had plenty of time to come up with proper score based qualifying strategies for them all. In the end, I think The Shadow was the only game where I considered something out of my normal approach. Unfortunately I don't have the scores for my qualifying games, I expected the online results to stay up until I get around writing this blog entry so I didn't take the usual pictures of my scores.

Very simple goal here: concentrate on the saucers. Kill first barrier with skillshot, second with stroke of luck, risk it for the third and flail for collecting the MARTIAN letters for Martian multiball. The main multiball is way too risky shot here compared to the jackpot value vs. saucer value later on.

My plans were scrapped pretty much from the start, I made an accidental shot to the stroke of luck and wasted my forcefield removal from there. I was devastated with the 600M from the first attempt and 1.2B from the second. Almost if I could see this one coming!

This is purely a bonus game: build your bonus and more importantly - build the multiplier! The multiplier is tied to drop target colors and you need to get the drops in sequence to get that multiplier. Other than that, just keep the ball in the upper playfield with the small flippers in there. 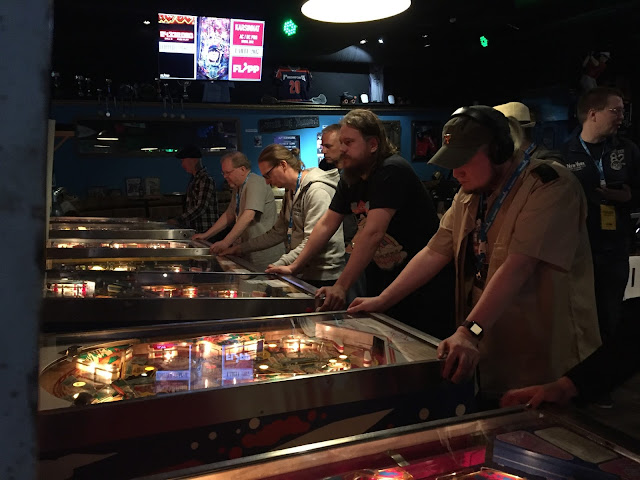 I played two decent games, nothing too wonderful but I assume there's a lot of people who don't know about how the bonus behaves. I managed to get 5x bonus twice here.

Dolly is all about your first ball because the bonus is cumulative. With 5 ball game this is even more important! Depending on how the the spinner works (and what your opponent goes for!), one valid strategy here is getting the first drop down target and then just gunning for the spinner. However, since this was a score based qualifying round, I wanted to maximize the bonus multiplier and then just keep on collecting DOLLY + PARTON letters ad nauseam.

I got one pretty good game in there, I managed to collect virtually everything I wanted on the first ball and then just went for the multipliers and the spinner.

My goal here is pretty straight forward: progress all the monsters so they're one shot from starting. Then start 'em all and start the Frankenstein's monster last, so it stops all timers and lets me work on them all during the multiball.

I played a rather sweet game here, my only screwup was that the last shot to the bride missed and I started the multiball with all the monsters but bride. After the multiball I got the bride as well and played the Monster Bash mode. My second game wasn't as good, but it was far from a total disaster.

To be honest, I don't have that well polished plan for the Shadow. I've been told trying the inner loop combo is the way to go, but most of the time the multiballs and Vengeance are good enough.

I got the multiball going nicely on my first game, got the jackpot and also played some Khan multiball. The second game didn't work at all and I couldn't even get the main multiball running.

I generally try to make the multiball ready, then start as many modes as possible, hoping to stack the ones that work well with random flailing, like having the Town square madness and all the clock modes running at the same time.


I played my qualification entries pretty early on, but I stayed afloat, easily staying over the cutoff-line at 32nd place. I spent rest of the day taking care of the technical issues in the games. Fortunately the games were in pretty decent shape and my services weren't needed so often, I even got to play the new Stern Star Wars in peace.

We returned to the crime scene the next day for more pinball action. One of yesterday's highlights was that my dad had also fought his way through the qualification and was still in the game when we went to head-to-head playoffs. The playoffs were "best 3 out of 5" on randomly chosen games. My first opponent was the Flipp organization headman himself, MRC.

We started out with Fun House. I had some issues lining up my shots. MRC wasn't doing much better at that time and we were both around 1M after the 2nd ball. MRC finished his 3rd ball as player 1 at 1.5M, I was a bit behind at around 1.2M. I was one ball shy from the multiball, so I made the lock shot and played (a painfully short) multiball, that fortunately let me get past my opponent.

We proceeded to Monster Bash. I was somewhat afraid of what MRC would do, so instead of doing a proper build, I just smashed the multiball on my first ball. The game was really unforgiving for both of us and that multiball kept me in the lead until the very end. I ended up with 13.9M and MRC with 1.3M.

With 2 wins under my belt, I had the chance to win this round with a flawless victory. We got Mars Trek. Good thing I know this game, as MRC really put his game face on here. The leader changed on almost every ball, until MRC tilted his 5th ball when he was just 5k behind be and I didn't have to play my last ball.

3rd win and I cleared my way for the next round. Unfortunately my dad got eliminated on the first round.

We started off with Fun House. It was very unforgiving for my opponent, good thing I had had the opportunity to play it at least once during the previous round. I played the main multiball twice on my first ball, reaching 9.8M for my 2nd ball. MVJ got another short ball on his 2nd ball and I played the multiball for the 3rd time, ending with 14.5M. He finally got his game face on for his last ball, getting to 2M but with my strong start I didn't have to play the last ball.

Next was AC/DC Pro. I was meaning to just play all three multiballs, but the pro version just feels a tad too bouncy for me. After two horrible balls (with my opponent getting pretty much the same) I finally got to play at least the Jam Multiball. It wasn't all bad and I ended with 14M. MVJ also played the Jam Multiball, but ended his last ball with 8M. Pretty disappointing game all-in-all.

We then went to play Mars Trek. Pretty Deja Vu-ish round, if you ask me. Mars Trek hated me from the very start and my opponent too way too easy looking victory over me with his 391k to my 205k. Blah.

Good thing we got the Twilight Zone for our next game. I had found the lock shot pretty easily during the qualification, so all I did was repeating light lock - lock ball. Multiball worked great and I got around 200M on my first ball. MVJ spent rest of the game chasing me, but in the end the numbers were 292M to 24M and it meant I won the whole round as well as this game.

Now I was just one round away from the end game. Losing here would mean going to the positions 5-8 game, to be played with just one machine as a 4 player game.

We started out with Iron Man. With a totally useless 1st ball, I got my game on for the second ball and played Iron Monger multiball. JMW didn't catch me any more and the game ended 8M to his 3M.

Next up ... you know it, Mars Trek. We actually had rather good game there. This was one of the games that ended up both players being perfectly okay with their scores, JMW was just better with his 451k to my 399k.

There's always the time for some random mystery game and this was Williams' LaserCue. I've never even seen this game and I've seen quite a few games. I had no idea what to do, so I quickly looked it up in Pintips. JMW appeared to be as lost as I was, but managed to barely beat me. I think I was like 1 or 2 droptargets short catching him!

Uh-oh, I was against the ropes now! I'd need to win the next 2 games or I was out. Deciding game was Cirqus Voltaire. I have nothing against Voltaire, but it was pretty tough for both of us, JMW managed to get the multiball running from defeating the 2nd Ring master while I was left couple of shots shy from it and ultimately lost.

That's it, I was out from the main game, with positions 5-8 game left.

This was a 4 player game for the said positions on Bally's Paragon. The game was in extremely punishing setup and was nothing but pure frustration for all of us. The only played who actually got his game on was JSZ, kudos to him. Everyone else ended with sub-100k scores, JSZ grinded respectable 782k.


I was 3rd in the game, which meant 7th position.

I qualified as 13th out of 32 qualifying players. A total of 74 players participated.

I was eliminated in the second-to-last round and was ultimately 7th in the whole tournament.

This was pretty well organized tournament all-in-all. I expected nothing less from pretty seasoned bunch of Finnish pinball hobbyists. I helped out as a mechanic, while Pilvi was helping out with the registration desk. This was the new Finnish pinball association, Flipp ry's very first tournament. Good job guys!

Now, this is not meant as a critique, but I was a bit puzzled by the tournament's name: The Finnish championship. I kind of understand the name back in the late 90s when we didn't have the league, but now proclaiming to be the "Finnish champion" just feels weird when the league exists and is way more challenging to win than just one single tournament. But enough of that.

I was very pleased to see so many early SS and EM games in the tournament! Maintaining EM games, especially for challenging environments like tournaments is a tough job, I tip my hat to whoever had serviced them before the tournament.

The location was excellent! Finland sorely misses a proper barcade and having the tournament in a sports bar was spot on! The only downside was that I was driving and couldn't get myself a cold one or two!


Until the next time.