Ah, the Finnish league. Thanks to my work schedule, I had already missed two of the league games and it didn't exactly look like I was going to be up there in top-3 to receive a league trophy. To be honest, I was rather reluctant to even attend and only signed up the last minute, thinking long hours of repairs and preparations for this tournament probably got most of what I had to give. I went into this tournament with the attitude of probably going to get my ass kicked in the qualification, but at least we'd hopefully host a good tournament at our arcade with as few malfunctions as possible. Maybe someone would even enjoy their time!

As always, the Finnish league has a qualification format of "player vs player, winner gets a point" where 4 best players in their group advances to playoffs. 16 players per group, 3 groups.

Playoffs are player vs player, best 2 out of 3, except for the final which is best 3 out of 5.

I was in qualification group A, which meant I had to start playing at the ungodly hour of 12:00. I'm not exactly a morning person, so I just had to dope up with coffee and energy drinks, then start flipping.

The playoffs were kind of a blur, but couple of games stand out. I played Revenge from Mars against TJM and played a rather "meh" game, but it was still good enough if we're not playing for high scores. TJM however caught me on his last ball and easily beat me there. I've been keeping his career on eye for a long time now, he's probably the most active person when it comes to attending all kinds of pinball (or gaming in general) related events in Finland and he's been really upping his game these past few years with consistent playing.


It's been years since I've played Gilligan's Island in a tournament, yet we graced the league players with mine this year and played it against AMP. We've been debating a lot about what to do in it, especially when the ingredients for the 50M shot are relatively easy to get. But I'd never risk it in a tournament game unless my opponent had already gotten the 50M jackpot, I just repeat the doubled Jungle run mode as long as I can. And it worked here just fine.

During the qualification I made a note I hadn't lost that many games, I assumed I'd be somewhere near the qualification cut line, but after I had finished my last game I went to see the score board and I had won 10 out of 13 and being the group A's winner. The next three players all tied with 8 wins.

Out of the local players, VPS qualified 3rd in group A, IDO won group B and RIK was group B's 2nd.

I really started feeling the long wait way before the playoffs started. I always prefer to play in the last group as if I'm still in the game, I can keep my rage on and not just wait out for hours, then OD on coffee again.

MRA had finished 4th in the group C, then crushed AKI 2-0 in the first round of the playoffs. Now we were to go against each other in round 2. Whoever wins here goes to the semifinals.

We started with Bally's old punisher, Star Trek. Funny thing about that, I actually have Star Trek because I fell in love with it during one of MRA's tournaments at his arcade.

Naturally Star Trek hated me and I couldn't get much done, losing my first game. Next up was Mousin' around, which fortunately was a bit more forgiving and I even got to play couple of seconds of multiball there, winning it.

Our last game was Stern's Playboy. MRA had a pretty strong first ball, at around 10M. He complained some oddity about the left flipper, but we couldn't repeat it between the balls, so the game was ruled to be continued. The left flipper failed at around 20 seconds into my first ball and we couldn't immediately find a reason for the failure, as the flipper was mechanically intact, powered and the flipper button was working as well. It was now ruled as a major malfunction and a new game was drawn: Stellar Wars.

Stellar didn't have a beef with me and I racked insane bonuses on each ball, easily winning it. I can understand MRA's disappointment in the end result, he had started with a good ball on a deciding game and we had to discard that.

Just as a curious detail, I debugged the Playboy later on. It had a very interesting transistor failure, where the game played just fine for hours, until the transistor driving left flipper coil got too hot and stopped working at random. It started working again once it cooled a bit. The problem was completely eliminated by just replacing it.

RIK had placed 2nd in group B and as such got to tie-break against two other qualification group #2's for the option to go directly into the semifinals. He played against TJM and MAX on Stellar Wars and won. This meant the playoffs would be between arcade administration members.

I was pretty drained from the round 2 and even more so from the very long wait between the qualifications and playoffs. I somehow managed to wrestle a victory from Doctor Who, lost on Contact and we had a final showdown on Judge Dredd, that ultimately went to me. Looks like I had found my way into the final.

My old friend OMO had placed 3rd in the group C qualification and had to fight his way from the bottom, going against my dad on round 1, another Kouvola region player IDO on round 2 and sending TTV into the bronze game in semis.

We started off with Stellar Wars, with me as player 2. My First ball was really horrible and I had to fight to keep the second ball in the game long enough to at least catch OMO. OMO had a rather rough last ball, but still left me about 15k to catch on my last ball. I was after getting 2x bonus and by the time I finally got it, the game was there, no need to continue my last ball.

The next game was another pick from my classics bank: Bally's Star Trek - the old punisher.

For the first 2 balls neither of us got that much done, I was at 20k, OMO at 67k, but knowing you can get 3x 20k indefinitely from the maxed out bonus shot, anything could happen at this point. I managed to hang onto my last ball long enough to collect the bonus couple of times and finish the BALLY-letters twice, bring my score up to 139k after the bonus count. OMO started his ball strong, but tilted from right outlane save at 73k, which also meant this game went to yours truly.

Next it was time to bring out the big guns. As in Williams' Big Guns. I see we're staying on our classics line.

OMO started his first ball by locking two balls, then immediately tilting the game when trying to save it from the right outlane when the ball save gate was still open, with 176k on the display. I played a rather tired multiball, ending with 734k. OMO's 2nd ball had rough luck and it only got him past 220k, mine wasn't much better. OMO's 3rd ball lasted literally just couple of seconds and that was it. League game 5/6 went to yours truly.

Watch a stream of the final here

I won my qualification group of 13 players.

I won the tournament. 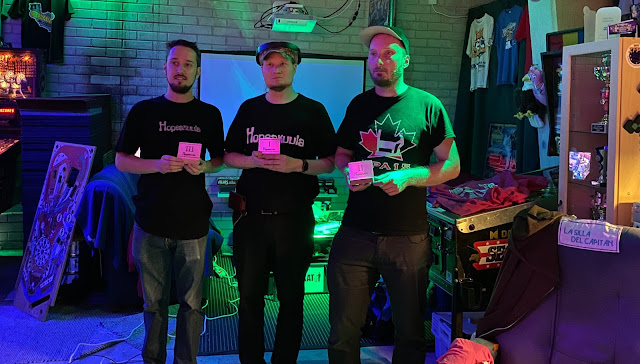 Having scored 8 league points from the season's 1st game, 7 from the 3rd and now 15 from this, it means there's at least 5 people who can technically still win the league. It's going to be an interesting last tournament of the season.