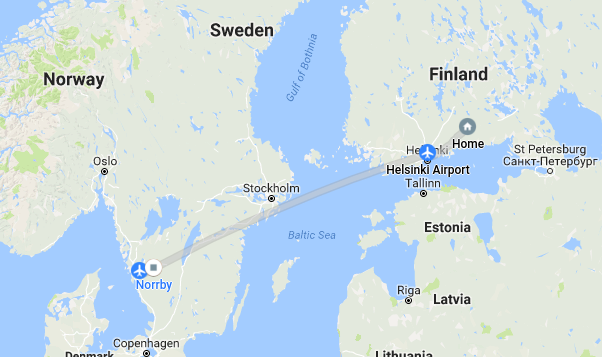 It's kind of funny how fast the Borås tournaments formed a habit for us. Inken, the proprietor has a vast collection of both; the very latest and classic games in excellent condition. We last visited the place last fall, but thanks to all the stress and being dead tired it turned out to be just a show of frustration and anger. Couple of Inken's pens might also gotten depressed and snapped themselves in half (a true story!) so as an act of penance I brought him a bagful of new ones and promised myself to take it a bit easier this time around.

We arrived very late on Friday night thanks to the strike at Helsinki-Vantaa airport. We almost missed the whole flight as it was cancelled. I just happened to be at the airport on Thursday when the cancelled flights were first announced and went to Finnair's service desk just for the laughs. They had couple of free spots on the evening flight to Göteborg and I was more than glad to switch to that flight. In the end the strike that caused over 100 flights to be cancelled only delayed us for around 4 hours.

I tried my luck with the quickie tournament, but couldn't do jack at that state of mind and decided to retire for the day.

The next day I started my grind with Bally's Eight Ball. Took some trying but I eventually found a sweet spot for plunging so the ball just reached the rightmost roll over lane, hit the upper right bumper, the 8-ball target and then came for an easy drop catch. After that it's just hitting the spinner. I also managed to collect all the pool balls for the 25k bonus, but unfortunately got it only on last ball. I got 191k, 75k and 193k. I thought I had done real bad, but after I logged onto the score keeping site I noticed I was 2nd best at that point.

Waiting for my chance to play Centaur I played Harlem Globetrotters. I originally didn't like it that much, but I'm slowly starting to warm up to it. Might even buy one some day. My go-to strategy of maximizing the bonus, then collecting the top saucer letters was bit hit'n'miss, I got 2 real bad games and one of 304k, which wasn't stellar but I had witnessed worse games on it that night.

Next I played Centaur. I wanted to do 4 locks, then play the full multiball but after finally having all 4 orbs collected and nailing the O-R-B-S droptargets in order with just S missing, I managed to miss the target and drain. Fuck-a-doodle-doo. I was aiming for 2-3M, but my best was 1.3M. Meh.

After the Centaur only Black Jack was left. I kinda like it. It has the same kind of a simple game charm as Eight Ball. Not much else to do, than hit the targets until player's hand was better than the dealer's, then collect the goodies from the right saucer. My best was 364k, which is far from my personal record or even expected score, but I'll take it over 5 digit scores I saw some players getting when the didn't know the game's rules. 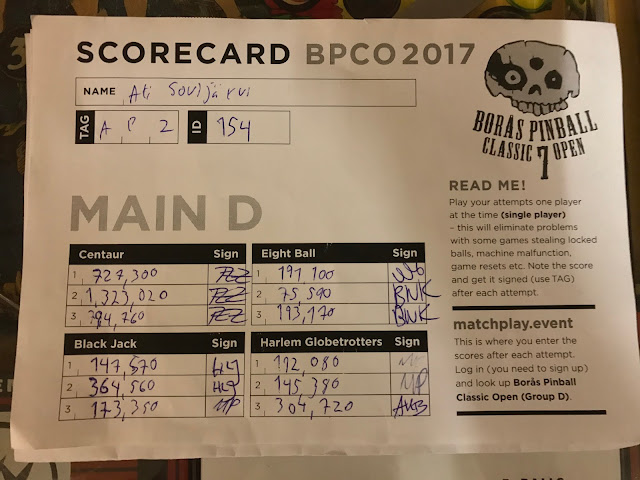 The modern games side tournament was played as match play first time(?) this year. There were multiple groups and everyone within the group played against each other once. With 13 players in the group, every point counts. I started out with a horrible luck. Some of the highlights include a game in Fish Tales; I had the video mode lit since first ball, never managed to make the shot to start it. All shots that went up the left orbit were too weak to actually land into the hole on the top. Eventually my opponent drained at 16M when I was at 18M. He got angry and pushed the machine real hard, getting two warnings. I expected him to tilt but no, the machine counted the bonus and it was 2.5M. Sigh.

I played several games where my opponent was just flailing around and I just couldn't get any of the game objectives going. Probably the most frustrating way to lose. Towards the end I had pretty much lost my will to fight and finished rest of the games concentrating on making the ciders in the fridge disappear. I managed to squeeze in couple of memorable ones as well. One of my opponents picked Corvette. I put 600M on it on the first ball, got up to 1.6B on the second ball. I didn't have to play the 3rd ball, but I've rarely annihilated anyone quite that bad on Corvette. Among the victorious games were also the Monster Bash, No Good Gofers and Scared Stiff. I didn't dare to pick any games I own, I have too much baggage on them.

In the end I won 6 of the games and didn't even bother to check the score board.


Couple hours later one of my opponents came to shake my hand and said "you won the qualification, good job". I was like "dude, what?". And yes, 4 players had had 6 wins, but I had won all those 3 others in a head-to-head game, so I went to the playoffs from my group. What the hell?!


During the day I also finished the Quickie tournament which was goal based on 6 machines. Not much good came out of that.

The side tournament qualification ended somewhere around 18:00. The playoffs started after 23:00. That was a rather long time to keep up the adrenaline. While waiting, I also took a closer look at Inken's dead Ghostbusters. The poor game had burned its 3rd node board in the 3 or so months it has been in use. Doesn't exactly convince me of Stern's Spike platform. I also really wanted to take some time and grind away the GB to finally build a good approach to it, but "No" says the man in Chicago.

Eventually I went against two Swedish players and one Dane, M_P, HBK and EGO. We were to play in 4 player groups, 1 player would continue to the final. The round scoring was 7-5-3-1.

I got to pick the first game and went with Tron. I recall I've done some board repair work on this specific game and it apparently paid me back with really good game. I played all the multiballs and was damn near of Sea of Simulation. In the end I got 69M, the closest other player had 21M and the rest were below 10M. So, 7 points for this one.

Feeling very confident with the good start, I got to start our next game, Congo. What a shit show that turned out to be! We had one player do over 2.2B on it, I was the last with 158M. I got like the shittiest bounces in the history of pinball, and always right after the ball saver had expired. 1 point.

Next up was Wrestlemania. Again I had a very clear strategy. Having grinded away Wrestlemania at Pinball Universe last month I knew to go for the Tag team right from the start and began to build it. But nothing went like I wanted it to do. The Tag team wasn't happening, so as a last ditch effort I started the referee multiball. That turned out to be a real flail-fest with zero good shots. Eventually I managed to put both balls up the opposite ramps. Except neither of the shots went up, the balls came screaming down, hit each other and JUMPED OVER THE FLIPPERS. My Danish opponent just looked at the whole thing in disbelief. I ended the game with 7.8M, which was the worst. The others were 60M-58M-25M, which is peanuts to what I managed to grind back in Germany. Sigh, 1 point.

The last game for us was Avatar. I think I had a theoretical chance to win, but only if we'd finish in a very specific order. I got the Ampsuit multiball running with very little effort, but managed to do a triple drain in some inexplicable stroke of bad luck. I got the Ampsuit running again on my second ball and I had locked the Link captive ball. Unfortunately one of the other players stole the ball and I had trouble putting another one up there during the multiball. I would have so needed the stacked multiballs there but no, you can't haz. In the end I was 3rd with 11M score and got 3 points. 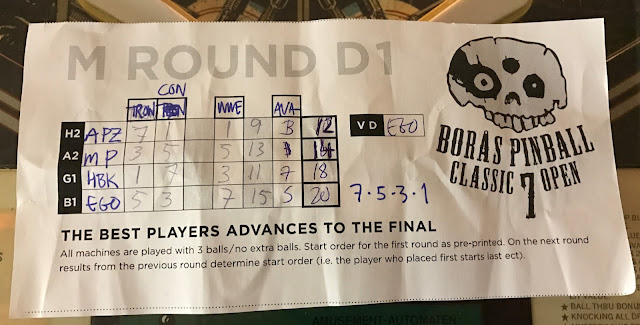 No matter from what angle you look at it, this was pretty disastrous ending to an insane luck in the qualification and strong start in the playoff.

I didn't qualify in the main tournament.

I qualified in the side tournament and got eliminated on the first round of playoffs.

I didn't qualify in the quickie tournament.