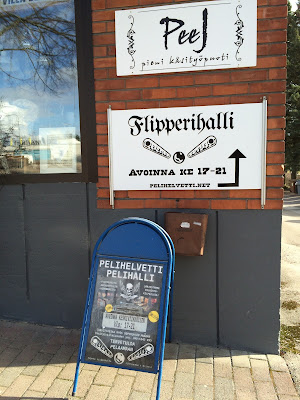 Barely being recovered of the jet lag from the PAPA/IFPA tour, we headed out towards Orivesi for their annual tournament. As with most Finnish and European tourneys, my folks tagged along as well. This tournament included a splits tournament as well for the first time(?) so me and my dad teamed up as usual as team XPS.

The main tournament had 5 games to play for high scores in qualification, with a total of 10 entries and maximum of 3 entries per game, then head to head playoffs. The splits tournament had very similar format.

We arrived less fashionably late, and only had bit over an hour to finish out splits entry. I quickly glanced over the rules, we had Fish Tales, No Fear and Hurricane, with 3 entries on each.

Since other games were being played at that point, we started with Hurricane. Funny thing about Hurricane is, that it's extremely rare game in Finland. Back in the 90s when we still had state monopoly on both gambling and entertainment games, the state owned company ordered one of each new pins, trialed them on location and then decided on whenever to buy them or not. The story goes that Hurricane flunked hard and they didn't order any more of those. I know this, as that trial run Hurricane was sold to a gaming company, where I worked in early 2000 and I actually worked on that specific Hurricane. Seeing the game we played here still had Finnish Mark prices in coin mechs makes me want to believe this is that same game. </history lesson>

Anyway, there's only one approach that I know of for Hurricane, and that is to go for the jackpot from the very beginning. The jackpot is lit when you collect all the PALACE letters from the right ramp, and skillshot gives you a free letter. Since it starts with "PAL" already lit, the jackpot is doable on your 3rd ball without looping the right ramp obscene amount of times. We spent 2 games on this approach, with my dad on left flipper taking care of the ramp shot and me on the right side, ready to make the timed jackpot shot. It just wasn't happening as the main ramp shot turned out a bit more challenging than anticipated.

We flipped sides for the 3rd game and went collecting the million shot from the center ramp instead, getting up to 5M. Seeing others struggle getting over 1M I think we had a good game there.

Next we took on No Fear. We went 100% multiball here with me on the right side. Start multiball, collect jackpots, repeat. Our first game was around 500M, the next closer to 900M with super jackpot collected. I've never done that with splits before!

After our 2nd game time was running out, but as other team was playing their 1st ball on Fish Tales, we played another game on No Fear, getting up to 750M.

While still standing in line for Fish Tales, it dawned to me that we had made a colossal mistake here! Sure, there was 3 entries per machine, but that was 3 entries MAX per game, with 6 entries total. We were in such a hurry that we completely missed the 6 entries limit in total! Now we had 6 entries played with one game to play. It was judged as us losing our best score in the last game, with was that 900M round in No Fear. There were a lot worse scores than our 750M on it, so I think we still had a fighting chance.

In Fish Tales we opted to go with modes, but couldn't make the right orbit shot to save our lives. With the 3rd ball starting at less than 15M on the board, I made a desperation call, shot the ramps couple of times to get the monster fish lit and collected that, ending our game to around 30M.

The main qualification was played on 5 games: Scared Stiff, Kiss, Wrestlemania, Avatar and Metallica. I started off with a pretty joyless game of Wrestlemania for 38M. According to the scoring system it was right there in top 5 on that game, so I didn't bother wasting more entries on that.

Avatar again didn't give me much reason to smile with a rather pathetic 12M score. Much to my surprise it was somewhere among best third of games.

Next I took on Metallica, which was probably one of the best playing Metallica Pro's I've played in a while. I've played much better games on Metallica, but after finishing my 60M game it turned out to be 2nd best in the tournament, and was most likely the only entry I'd have to play on it.

Last fall I got to play Kiss for the first time here, and I got around 80M on it on first try. Sure, the software has evolved since that, but my two first entries with 3.5M and 6.9M scores were still pretty pitiful. I had to play the 3rd and final game on it as well, only getting to 27M. Still, I easily take that over the previous scores, but this might just have been the weakest game in my qualification.

Next I picked the only non-Stern game in the lineup - Scared Stiff. I played a pretty bland game of 8M on it, leaving Stiff-o-meter lit when I drained my last ball. As the top-5 fit in 10M+ range, I just needed a little bit better game, and that's what I got on the next try with 11M, which was 4th best score today. 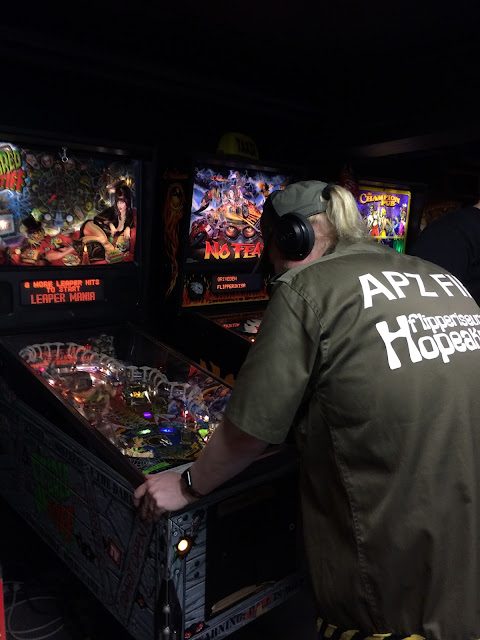 Having played all the games I was past the cut line easily, but since the 4 best got one bye, that's where I wanted to be. Metallica and Wrestlemania were good enough and there was no easy points to collect. Kiss could have used little more love, but I was out of entries. Scared Stiff had only 4 points up for grabs, so I concentrated my efforts on Avatar, with a target score of 60M.

Not sure if there's much main objectives in the game, but to combo the Link and Ampsuit multiballs and cross your fingers, I got 27M on my first and 30M on my second attempt, barely taking me to 4th position in the qualification.

As the qualifying round was coming to an end, TMA managed to squeeze himself past me, which meant I'd be starting from the round 1 in playoffs with players from positions 5-12.

Despite the screw-up in qualification, team XPS made it to playoffs, which was played head to head against another team, one game knockout style.

We went against the arcade owner himself and his buddy, Team W&R.

No Fear was picked and while we had a proven strategy for it, we were pretty quickly and unceremoniously beaten, as we only got one multiball running, and didn't collect any jackpots. This meant we were out of the tournament.

Playoffs were played best 3 out of 5, with me starting from the round 1.

Looks like me and SAM get to play often against each other in Orivesi. We started off with Metallica, on which we went neck to neck until on 3rd ball SAM was leading me at the the end of his ball 22.1M to my 19M. I had nothing but half way done Sparky lit, so I very carefully bashed the poor Sparky into oblivion, starting the Sparky multiball, then Coffin multiball and eventually Grave Marker as well. I finished the ball off with Crank it up's Sparky bashing mode, having 60M+ after my last ball.

Next we drew No Fear, with me as player 1. This time I really found both lock shots, grinding away jackpots and got the super jackpot twice finishing off with a pretty successful Payback time on my last ball. SAM started with two short balls, and finally got his game going on his last ball, but couldn't catch my lead at that point any more.

Our 3rd game was possibly deciding one and was played on Kiss. Neither of us got off to a good start, I pulled a slight lead by playing the Love gun multiball, but couldn't get the locks lit for the main multiball. I had bit over 8M on my 2nd ball, which SAM as player 1 couldn't catch on his 3rd ball, which let me to play my last ball just for fun. For the record, I still find Love gun multiball way safer to start from the STAR scoop than the damn steep ramp.

The arcade owner, TMA had played a last minute entry to knock me off my 4th position and one bye. Now I was where I would have been should that have not happened.


I groaned inside when Maverick was drawn as our first game. I think I put on a valiant attempt, but somehow didn't manage to score that much even when I did get the multiball going, TMA beat my 360M with his 510M. I'm still not sure if I should just ignore the jackpots altogether and just combo multiball with super pops like in Guns 'n Roses.

I don't think I've ever played Champion Pub in a tournament before. Kind of shame, as despite it's limitations and repetitive game play, I wouldn't mind owning it some day. I started the first fight from the get go, and lost it to a center drain as the post went down way before I expected it to. TMA didn't have it any better and in the end I barely won the game.

Next up was Metallica. I was pretty confident on this one, but totally goofed up my first ball, spent the second catching TMA and then finally ended the third ball at 10.3M to TMA's 8M. TMA switched to extremely careful playing, started Sparky and went past me, ending with 14.7M. Oh well.

Our last game was Avatar and there's not much to say about that round. I really needed 2 more wins to continue, but after completely wasting stacked multiballs and ending up with 4.6M TMA totally deserved to win the whole round with this 18.5M ending. This also meant I was out.

TJM, JHQ, ELP and yours truly found themselves on a less serious game for those eliminated just before the semi finals. A single game, Hurricane was drawn, and it would decide our final positions. Since not everyone knew the game, I briefly explained the main features of the game.

The game was so merciless and random that we could only laugh at it. In the end ELP won, being 5th in the whole tournament, me being 6th, JHQ 7th and TJM 8th.

I was 5th in the qualification and qualified without bye.

I was eliminated on 2nd round of playoffs, being 6th out of 26 players in the whole tournament.

Team XPS qualified in splits tournament, and was eliminated on 1st round of playoffs. Our final ranking was not made available by the arcade owner.